Blog
You are here: Home • Blog•blog • 10 things that Conversion Copywriting can teach you about Language 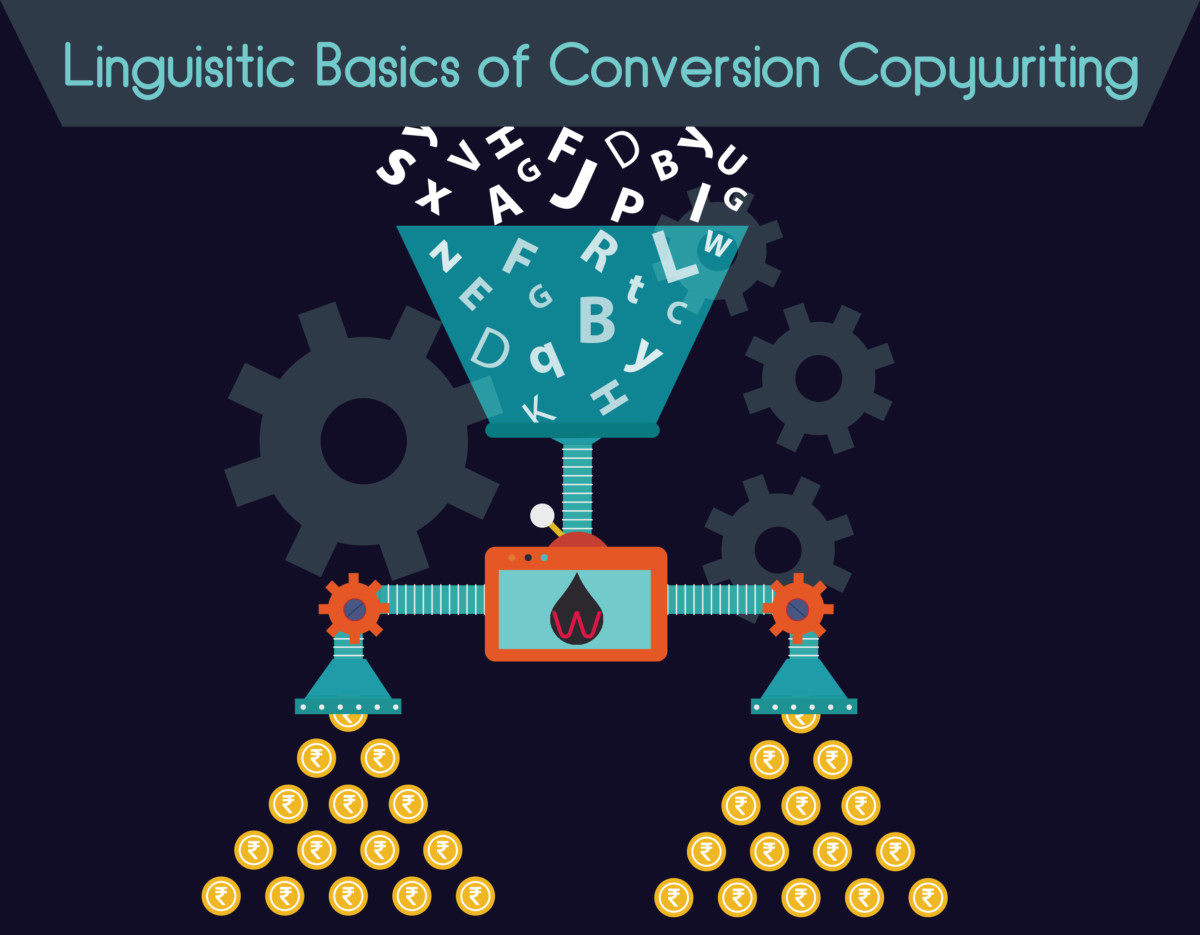 Conversion Copywriting is an art for that requires perseverance and practice to master. One of the reasons behind it being an especially painstaking practice is because of the immense potential it holds. If everyone could do it, the practice would have lost its essence and significance a long time ago. However, the significance of the same arises from the overall power that conversion copywriting embodies as far as getting people to perform some particular action. In a way, if you master conversion copywriting, you are capable of making people do exactly what you want them to do. That sounds more like sorcery than a marketing technique, does it not? However, perfecting the art of conversion copywriting can also help you in understanding the immense powerful that language holds.

The Word of the Day is…

How many bloggers or content marketers out there pay attention to each and every word that they write? Before you raise your pander (interesting little word there) up into the air about how meticulous you are with the process of content creation as a whole, the thing about this; have you ever wondered why you use the “you’s”, “because’s” and “new’s” where you do? Don’t you think there just might be some form of pattern that you might be following unconsciously while writing? Well, if you do not pay too much attention to these words, you might want to start, because they just might be the magic keys to higher conversion rates on your ads.

According to bloggers and researchers, there are a few power words which are supposed to have their own superpowers as far as conversion copywriting is concerned. For instance, the power word “you” signifies the literary bridge between the writer and the reader, thereby allowing the reader to connect with the ad or message on a personal level. Personal connection is a powerful tool for conversion, and hence, the word “you” is rated high on the scale of potency. At the same time, the word “because” acts as a linguistic connector between a particular action and the inherent reason behind the same. Hence, it compels the reader to take an action owing to all the wonderful things that could happen if he/she does. At the same time, the word “new” is a powerful tool for conveying novelty and freshness, thereby allowing the reader to access a feeling of escaping from a world of routine and monotony. Yes, a single word can do that!

Customer psychology is an aspect that just cannot be ignored when indulging in conversion copywriting. According to one of the biggest bloggers out there, Neil Patel, the importance of customer psychology in conversion copywriting lies in two specific behavioral traits, namely scarcity and urgency. On one hand, the concept of urgency is tailored around the fact that customers always follow their instincts. This is a good thing, as it makes them vulnerable to psychological cues and subtle intentions. One of the best ways of using their instinctual behavior to the benefit of your own campaign is to create action triggers that make them feel more comfortable in doing what you want them to. These action triggers can be found in language, in the form of specific words as well as patterns. For instant, words which promote instant gratification, especially after a slow and painfully exciting build-up, such as “instantly” and “free” are sure to give a hard digital push. Moreover, reducing the usage of words such as “is” creates a large amount of insecurity in customers, even though it may be felt only subconsciously. Verbs that denote or prophesize some specific event in the future, such as “it is”, “we are”, “I am”, “they are” can subconsciously awaken feelings of ordered precision and even mental imprisonment. This can be avoided; all you need to do is reduce the amount of emphasis of establishing or cementing concepts and ideals. Remember, our ancestors have been oppressed and forced into completely foreign belief systems. We share our collective unconscious with them (thank you, Carl Jung) so be nice!

Talking about the collective unconscious got me all excited about the human condition, especially the concept of culture. Our cultural background plays a huge role in the way in which we perceive language and words in general. Of course, the way in which concepts like gender, direction and time are perceived is considerably dependent on culture as well. However, the real fun starts when cultural perceptions collide with linguistic frameworks. For instance, in languages like English, verbs are labelled with a particular tense while in languages such as Indonesian verbs are use irrespective of any time-based constraints. However, in languages such as Russian and Turkish, it goes deeper than that, whereby verbs are modified by the degree of completion as well as by the evidentiality. In simpler words, if you are speaking Turkish, expressing yourself through verbs would require you to modify it according to the source from where you garnered the information. Here’s a bit of information to twist your mind a little bit more; there is a tribe of indigenous people in Australia who use directional orientation (north, south, west, east) to describe even common aspects within the realms of space and time. This means that depending on your specific location, a simple line such as “there is a spider on your right leg”, could be interpreted as “there is a spider on your east leg” or “there is a spider on your north leg” and so forth.

I would like to apologise if I caused you some mental strain with all that information; allow me to help you reach a crossroads of comprehension for now. Depending on location as well as the type of people you are targeting, it could be of immense help if you structure your conversion copy according to the cultural background of the readers. For instance, if you are targeting the population of a country that utilises feminine noun modifications, such as Russia, it will serve you best if you tailor the conversion copy in a similar way. You would have to go as far as using masculine forms of nouns such as a chair, which would even encompass possessive case adjectives such as his, her, my, our, their, and so on. Do your research before you target those big fish!

Knowing the biological structures that are responsible for the creation and development of our linguistic frameworks can be a huge boon as far as conversion copywriting. Imagine the degree to which you could influence someone if you could somehow gain direct access to the place in the brain where thought processes and language is processed and conceived! To have a big enough impact on the audience, you need to understand how a crucial part of the brain works, namely the Broca’s area. This part of the brain is responsible for the comprehension of language. However, just like many other parts of the human body, creating any substantial impact on the Broca’s area requires the harnessing of some pretty intricate skills.

You can influence the Broca’s area in your readers’ brains by maintaining a balance between two basic elements, namely novelty and credibility. On one hand, your content needs to be new and fresh enough to activate or awaken this part of the brain, but also has to be credible enough so as to ensure that the readers’ do not dismiss it completely. It is like a two-sided sword when it comes to influencing the Broca owing to the evolutionary characteristics that it has developed over the years. Owing to the large amount of linguistic information that we have had to process throughout the years, especially in the modern age, the Broca has learned to ignore information that it does not find interesting or novel enough. However, it is also equipped with the distinct power of noticing and assimilating information that is new and unique. Hence, when you create a conversion copy, remember to create content that can activate your own Broca’s area. The only way to know whether you have succeeded is when your conversion ad copy makes you go “whoa”!

Language is a labyrinth and it is very easy to get lost in the same, especially due to aspects or practices such as over-analysis. The depth of syntax and semantics in language allow for the opportunity to formulate endless numbers of meaning out of a seemingly simple piece of content. You might remember how professors in English classes loved to preach about meanings in poems and stories even behind simple and commonplace sentences, most of which would relate to elements completely outside the story such as the writer’s political inclinations. Even though we might have crossed these instances off as being mere fragments of ignorance-worth memory, they are part of a much bigger problem known as analysis-paralysis. The concept of analysis-paralysis indicates a considerable lapse in decision-making capacity owing to over-thinking and over-analysis of the situation. To comprehend and conquer analysis-paralysis, one needs to understand the root of the problem, which is seated within the psychological response towards “choice overload”.

The two most classic types of behaviors that is seen when individuals are confronted with a large number of options is either to seek the choice that serves most of their needs, or to look for better alternatives. Both of these actions or responses could lead to unwanted repercussions for you as a conversion copywriter, especially when you want them to take a particular type of action. The key here is to be as simple and open as possible, including the utilization of comprehensible jargon along with specific and easy choices, which can be tailored in such a way as to lead to an acceptable outcome. A good way to learn more about analysis-paralysis would be to observe the behavior of individuals who are learning a new language. Owing to the considerable impetus on perfection, they tend to ignore simplistic and experiential modes of learning, which involve practicing and trying the language in real-life situations. This shows the immense depth that language is characterized by, giving a glimpse into how simpler conversion copies can be more effective than complex ones, offering numerous options.